Studies conducted by reliability specialists on electronic products lifetime show that this type of products present a high failure rate in the beginning of their lifetime. That rate decreases drastically just a short period of time after the start of the so-called “normal life” period, continuing low for the rest of the products’ service life.

Burn-in and Climatic Stress Screening are processes used by the test systems industry, usually in hardware devices and equipment, before these are released to the market with the aim of identifying possible problems or malfunctions. Using these processes enables the shipment of new equipment in the “normal life” stage with a very low failure rate to the end consumer, increasing consumer’s satisfaction and reducing the warranty costs to the manufacturer.

Reliability specialists often describe the lifetime of a population of electronic products using a graphical representation called the bathtub curve.

The bathtub curve consists of three periods: an infant mortality period with a decreasing failure rate, followed by a normal life period (also known as “useful” life) with a low, relatively constant failure rate and concluding with a wear-out period that exhibits an increasing failure rate.

The infant mortality period is a time during which the failure rate goes dropping but is undesirable, as a significant number of failures occur in that short time, causing early customer dissatisfaction and warranty expenses.

Theoretically, the failures during the so called “normal” life occur at random but with a relatively constant rate when measured over a long period of time. Because these failures may incur warranty expenses or additional service support costs, it’s desirable that the bottom of the bathtub curve is as low as possible, and that less wear-out failures occur during the expected useful lifetime of the product. 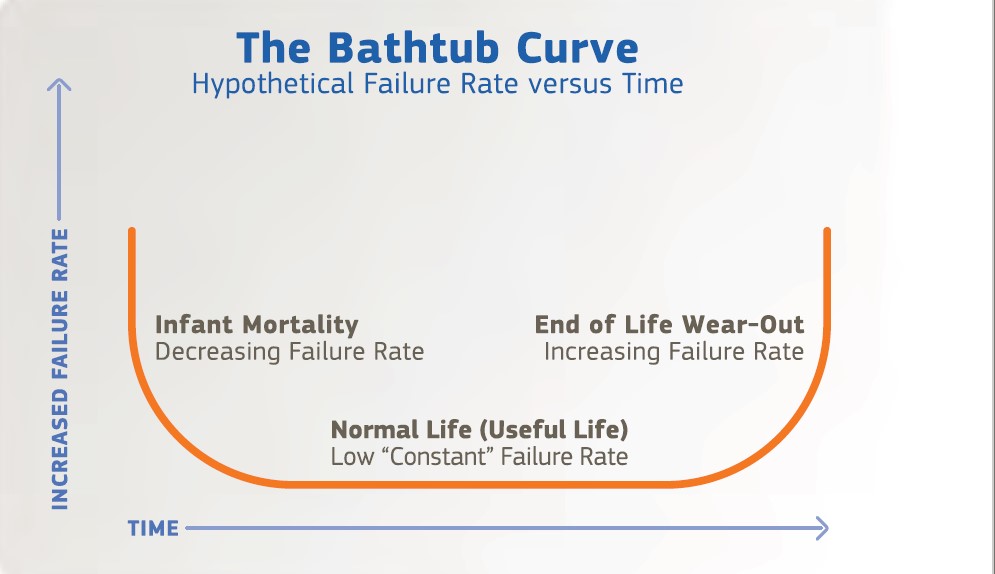 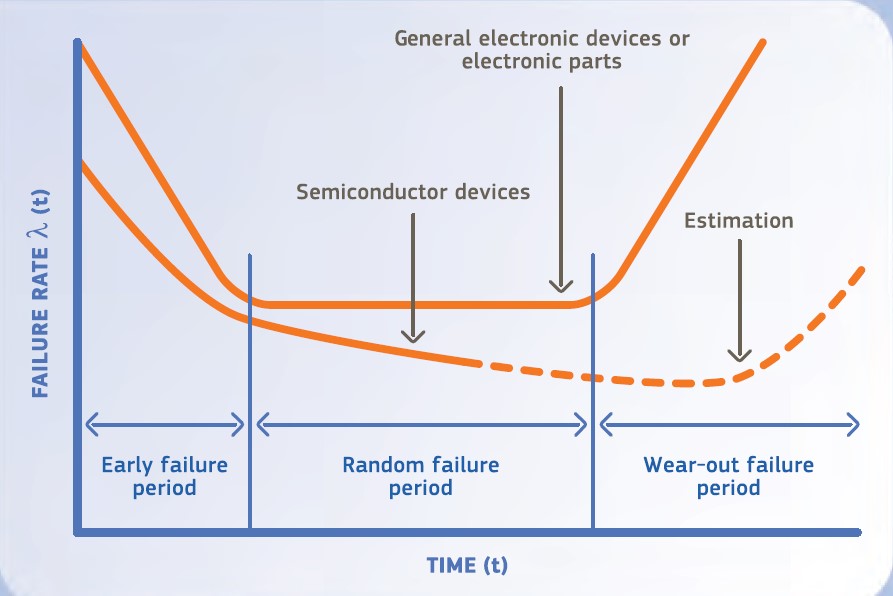 From a customer satisfaction point of view, defects during the infant mortality period are unacceptable. They cause “dead-on-arrival” products and undermine customer confidence. These infant mortalities are usually caused by flaws in the design or production. To avoid them, the product manufacturer must determine methods to eliminate the defects. Appropriate specifications, adequate design tolerance and sufficient component derating may suffice, but even the best design can fail to cover all the possible interactions of components during operation. 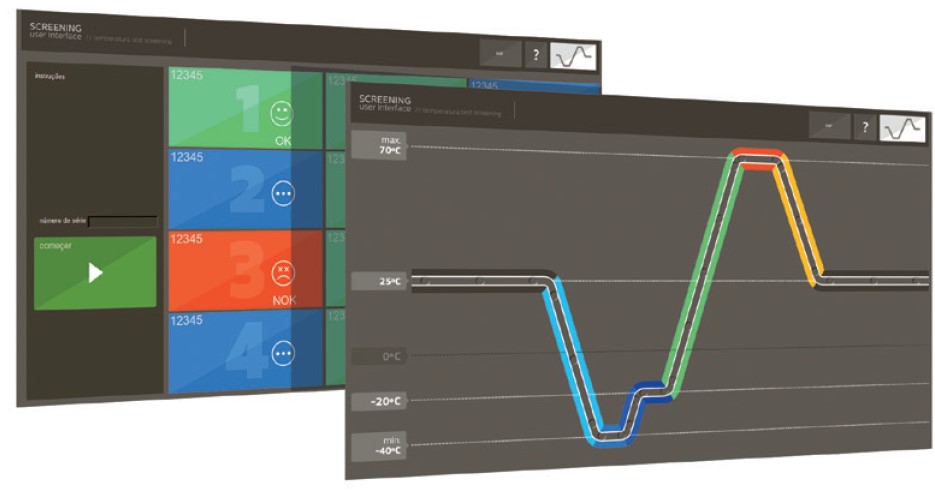 Such tests are called HALT (Highly Accelerated Life Tests) and HAST (Highly Accelerated StressTests) and should be applied with increasing stress levels as needed, until failures are precipitated. The failures should be investigated, and design improvements should be made to increase product robustness. Such an approach can help to eliminate design and material defects that would otherwise show up with product failure in the field.

Burn-in and Climated Stress Screening are two HALT techniques, that typically use temperature and vibration step-stressing and that are proven to be effective with technology such as leading edge semiconductor chips. There are bulk defects in silicon and minute fabrication variances, however, that cannot be designed with the current state of technology.

In addition to the best design approaches, environmental and stress testing should occur at the earliest development phases. These are valuable tools to evaluate design weaknesses and uncover specific assembly and materials problems. 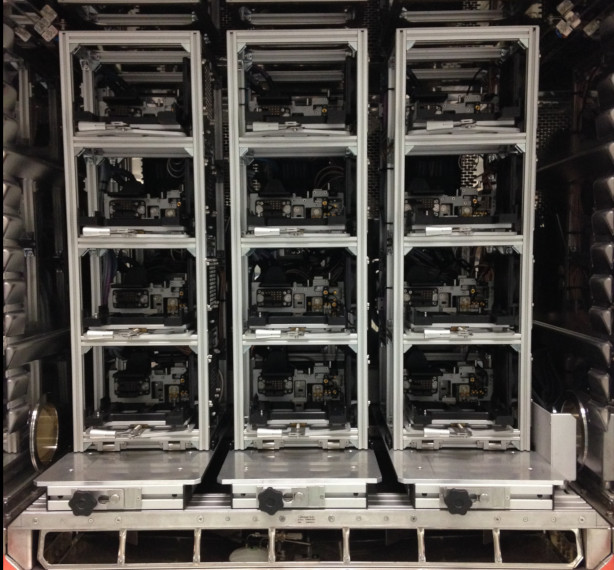 Burn-in test: how does it work?

In this type of tests, electronic devices are kept in operation for an extended period of time under more stringent and extreme working conditions. The idea is to incite an accelerated ageing process on electronic equipment so that their initial critical period, with a high rate of damage, happens during the production process and the probability of subsequent malfunction is reduced.

The accelerated ageing process consists in maintaining the equipment working at high temperatures using a temperature-controlled oven where the products are placed and remain working for a period of time, during which the acquisitions systems perform functional tests to check if there are any changes on the products’ characteristics. The specific values of temperature and time depend largely on the product characteristics but normally vary between 60°C to 80°C and between 30 to 50 minutes.

It is assumed that products that survive a burn-in test may expect a long service life. 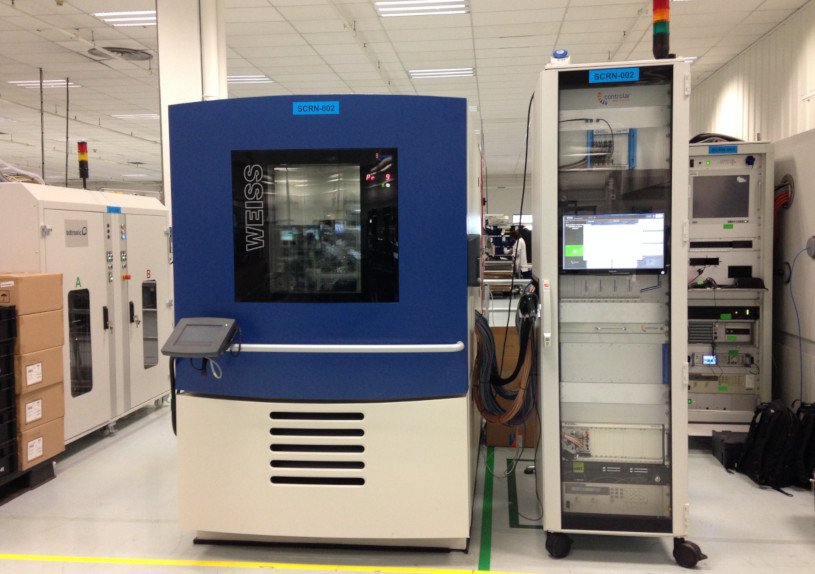 Climatic Stress Screening is one of the HALT that is being widely used by all manufacturers of the automotive, aeronautics and train industries.

A Climatic Chamber is used to perform a predefined temperature and humidity profile according to product specification. During the profile, several functional tests are performed to the products inside the climatic chamber. Since the climatic profile can take several hours and because the Screening is performed to a significant part of the production, a very high number of products must be installed and connected inside the chamber to be tested sequentially.

Controlar has been developing burn-in systems, with automatic or manual (un)load of several electronic units to be tested simultaneously and running in a controlled environment.

The company has also developed a module for burn-in systems capable of controlling up to 10 simultaneous units under test, especially suitable for the infotainment industry. This module includes a CAN communication option, power supply control, USB communications, as well as other options related to the products’ specifications from specific customers.

These systems can also perform other types of procedures, such as flashing and automatic load/unload of the DUTs. 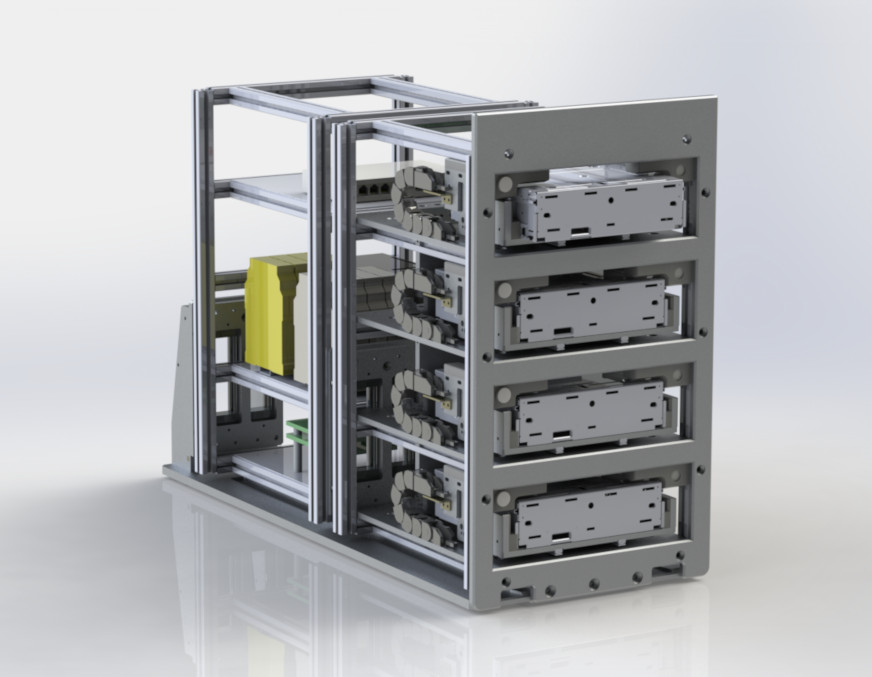 The company is also using its functional tests know-how to develop hardware and software for screening applications capable of testing several units inside the climatic chamber.