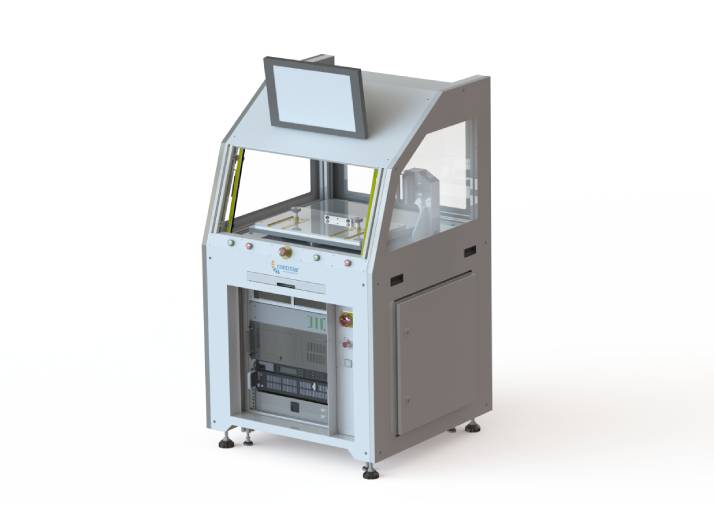 Highly stable and safe thanks to anti-vibration supports

Simulation of the product real working and transportation conditions

Improved design granting excellent level of comfort for the operator

Controlar Vibration Test System is a highly stable test system with vibration to be used in production lines or in laboratories under a controlled environment. This system can determine the extent to which the DUT can withstand mechanical vibrations and fatigue damage that could be encountered in handling and transportation, among others. Moreover, it can be adapted to other tests such as functional tests which require vibration loads.

The principle of operation is based on the simulation of normalized vibrations that might affect the components of the final product under controlled conditions (eg. infotainment clusters). The test may be performed under a fixed frequency sinusoidal vibration or under a sweep of frequencies.

The machine structure has been designed to hold and absorb the vibrations during the test which could be transmitted to the most sensitive devices in the system. For this purpose, anti-vibration feet were applied. The structure’s weight is dimensioned to sustain the major forces generated during the test. In order to achieve this, the platform under vibration was reinforced with a 142 kg platform, contributing to the machine stability.

The vibration plate is mounted on three low-resistance silent-blocks with a capacity of 20 kg each. Their triangle configuration supports and compensates the weight of the nest applied on the top front keeping the plate’s balance while allowing a free and smooth movement of the plate. Thus, the silent-blocks are capable of absorbing the residual energy resulting from vibration, thereby reducing the amount transferred to the machine frame.

Bearing safety in mind, different precaution measures were implemented according to the machine’s response to vibrations. Examples are the application of safety light curtain sensors and the distance between the top plate and the base that were calculated in order to minimize the risk of injury.

This system is specially suited for the test applications in the automotive industry, which require the DUT – such as clusters, auto radios, bezels and smaller components like buttons, knobs, etc. – to be under simulated environments of vibration loads.